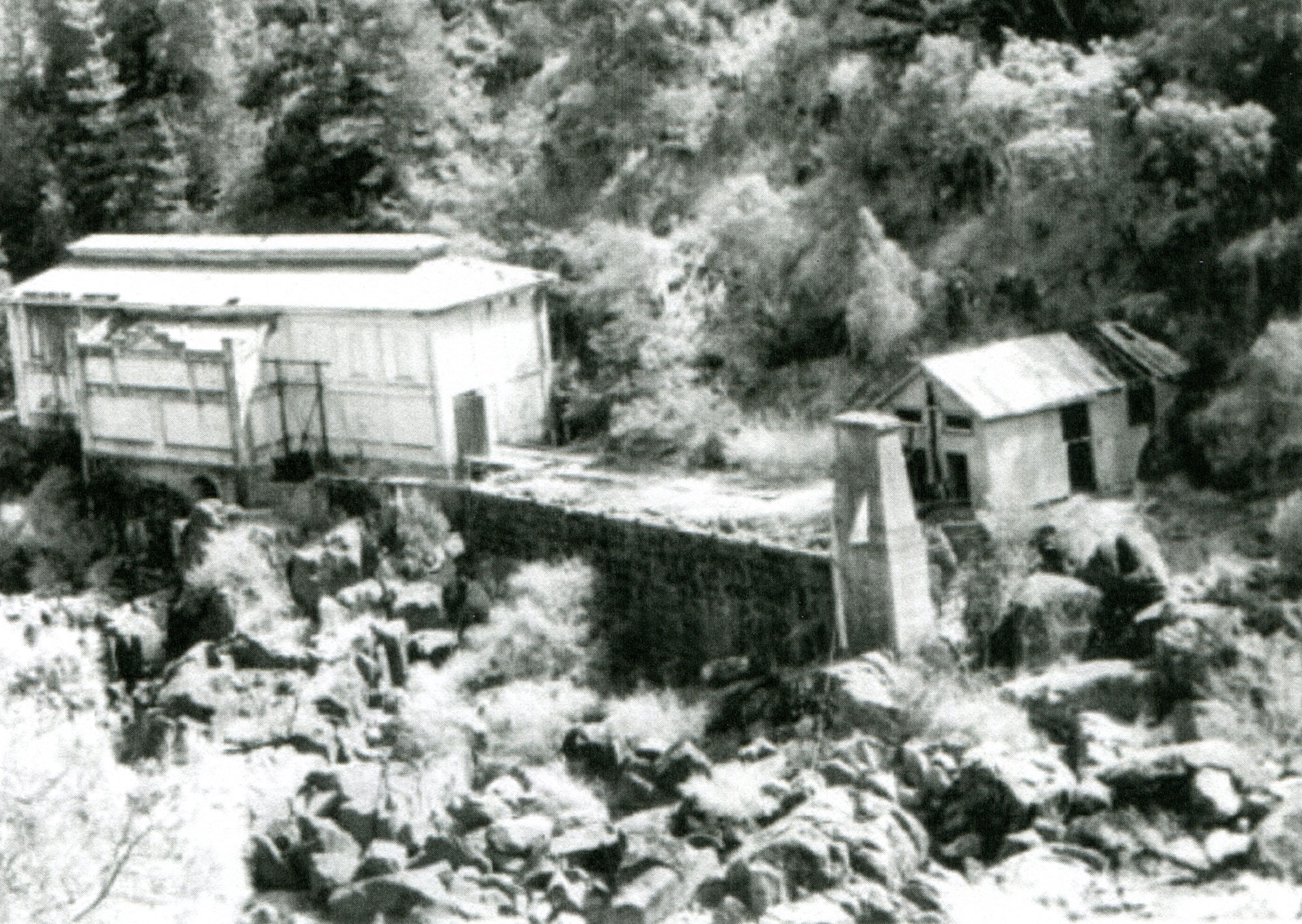 The suggestion to create a museum at Duck Reach was first mooted in December 1956 in a letter to the editor of Examiner by Mr Michael Shari and of Hobart.  In his  letter of 17th December 1956 he suggested that the Duck Reach Power Station,  with state  backing of the Launceston  City  Council,  be established as a technological museum. Mr Sharland at that time was Secretary of the Scenery Preservation Board and an authority on early Tasmanian buildings.

Later that month, in another letter Mr A.R. Evershed of Launceston endorsed Mr Sharland’s letter stating that ‘probably the original plant was the first, or one of the first high  tension alternating current hydroelectric plants for long transmission in the world’  and that ‘it would certainly be a crime to destroy such interesting historical matter’.

In late March 1957 the state Hydro Electric Commission offered the station to the Launceston City Council stating that ‘if it is left unattended it will soon deteriorate and  Launceston will lose a unique beauty spot which attracts thousands of people each year’. The Scenery Preservation Board at the time was prepared to donate old machinery for exhibits. 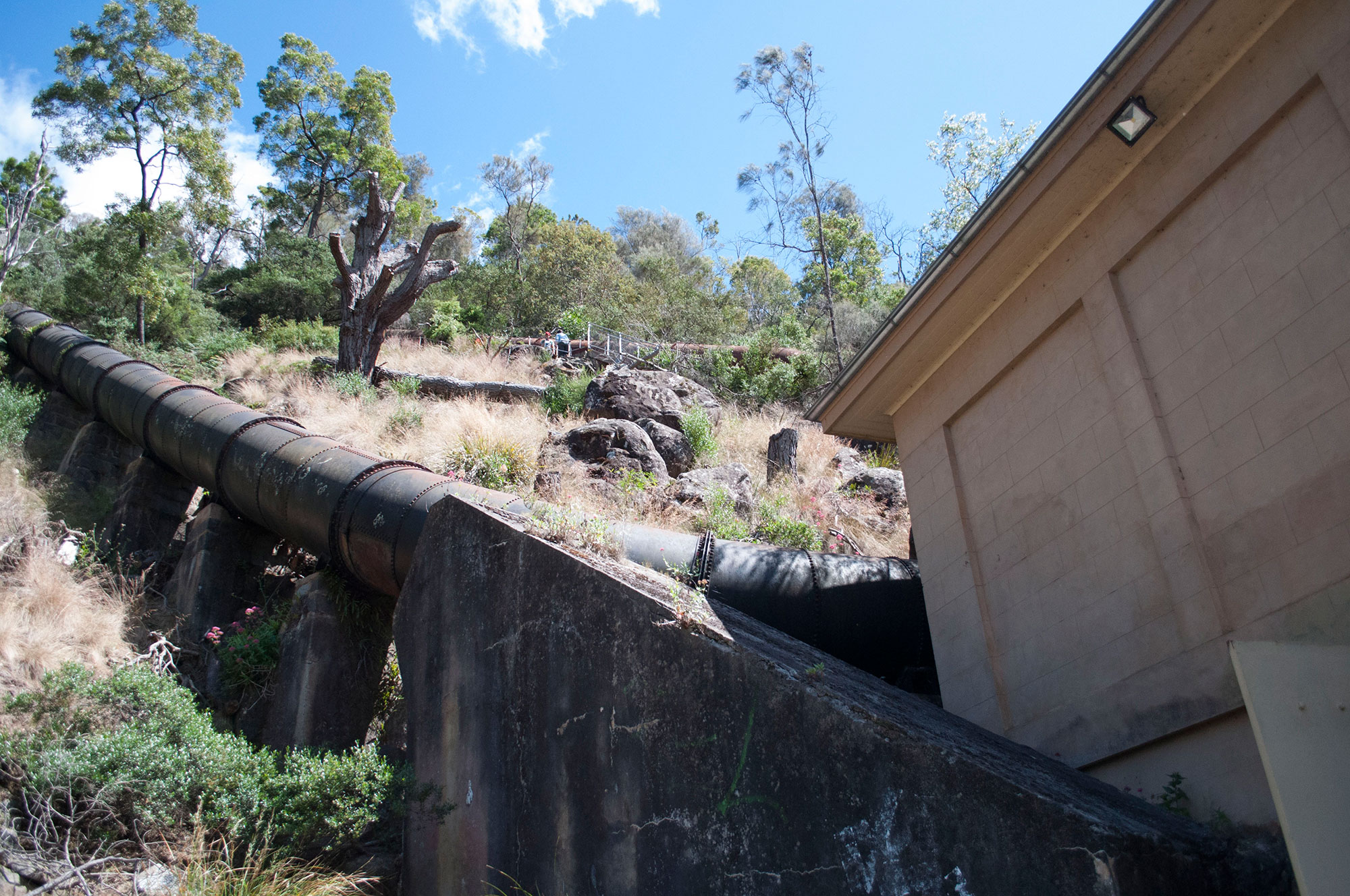 The Director of the Queen Victoria Museum was  asked by the council to report on the atter.  The Director of the museum recommended to council to decline the offer saying that ‘somehow I can’t help but feel that it is a little unfair to suggest that the council would be to blame if these buildings and bridge were demolished. After all the Hydro  owns them and has used them and surely it is the responsibility of the Hydro Electric Commission or the Scenery Preservation Board  to preserve these government assets’.  It seems he was very unenthusiastic.

Some twenty years later the ‘Launceston   National Conservation Study’ suggested that  the building could be used as a museum of industrial archaeology related to its history.

and that the Trevallyn State Recreational Area be improved.

In the ‘Cliff Grounds Reserve Interim Management Plan’ 1982 by the Launceston City Council Parks and Recreation Department, recommendations were made similar to those made in the ‘Riveredge Study’.
In 1995 on the centenary of its first opening, the power station was made weatherproof, the suspension bridge restored and the building re-opened as a museum.

The Tasmanian Legislative Council Hansard of April 2011 records a lengthy debate in  which Kerry Finch MLC for Rosevears suggests’ the   resurrection of the Duck Reach Power Station as a working mini-power station’ as a means for getting more “water down the Gorge”. It  would be an understatement to suggest that this has been a favourite discussion point in  Launceston for longer than many would like   to remember as a possible solution to clear some of the silt in Home Reach where the Esk  Rivers meet to form the Tamar River. 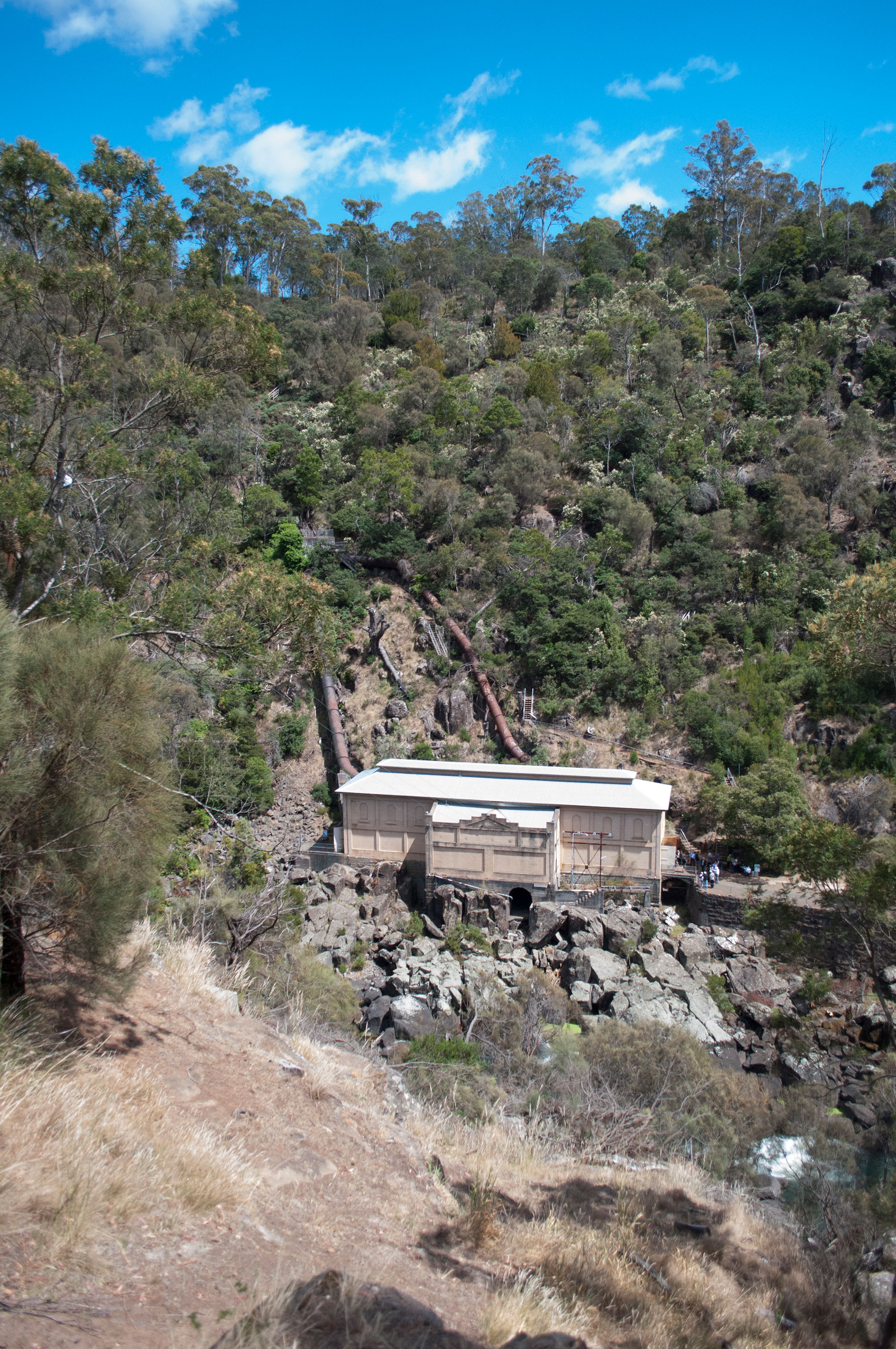 In March 2012 the Launceston City Council voted in favour of investigating the redevelopment of the historic Duck Reach power station for power generation with initial interest from Hydro Tasmania.

During the late 70s and through into the 80s, the general decline in the Tasmanian industrial economy and dramatic technological changes had left Launceston with the legacy of many dormant industrial buildings, containing redundant industrial machinery.

Enterprises in Tasmania had not been able to keep up with the advances in knowledge in other countries, and insufficient funds had forced many companies to close their doors. Their machinery sold to scrap dealers or to brave new companies.

The textile industry is a good example. The textiles in Launceston were probably one of the first   in Australia to take advantage of cheap hydro electric power over steam operated machinery. Launceston at one stage was reputed to having some of the finest textile products in the world. This cheap hydro electric power allowed the companies, such as Patons and Baldwins (later Coats Patons), Thyne Brothers, Kelsall and Kemp and Rapson Tyre Works, to sell their product very cheaply. The Alexander Tennis Racket Factory benefited from the cheap power.

Apart from street lighting the Launceston Municipal Council was able to run the municipal tramways, pumped water and wastewater services.

The combination of Tasmania’s remoteness, the advent of polythene fibres, expensive and more efficient machinery easily available elsewhere, general economic decline and increased wages have forced these companies to close or scale down their operations to more specialised products or move their operations overseas.

In the minds of the ‘veterans’, the industrial place of work evoked a rich community patriotism, centred on their place of work. This was most obvious in sport. Many companies formed small sporting clubs and groups that contested various games against other similar companies. Patons and the Railway until the 80s organised building in Australia.

The idea for the generation of electricity in  Launceston by means of water power came at a time when Launceston was coming out of its deepest depression yet known.  The council had just borrowed thousands of pounds, in the middle of the depression, in building the Albert Hall.  To burden the citizens of Launceston with yet another rate increase must have been brave, very brave indeed.  In those days, critics were more common than today, the local council affected their lives more directly than today.  The council was virtually their government. 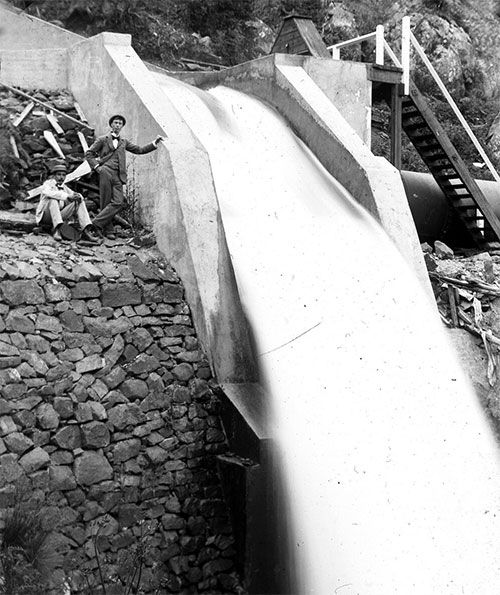 It was able to break away from potentially unreliable supplies of coal from NSW to generate gas to light the streets.  They had relied on this for 40  years.
Now it  was about to launch itself into this new hydro electric power.  However, when the citizens were asked to vote in favour of the scheme they voted ‘Yes’, by a very healthy majority.  This ‘Yes’ vote probably assisted Launceston to recover from the depression and to  move far ahead of many other regional cities in Australia.
It is most interesting to note that the council had the confidence to rebuild the station in  1930, in the midst of an even greater depression even though the Hydro Electric Commission   was operational, and the bulk of the council’s electricity was being sold to the Government’s Hydro Electric Department (later the Hydro Electric Commission, now Hydro Tasmania). 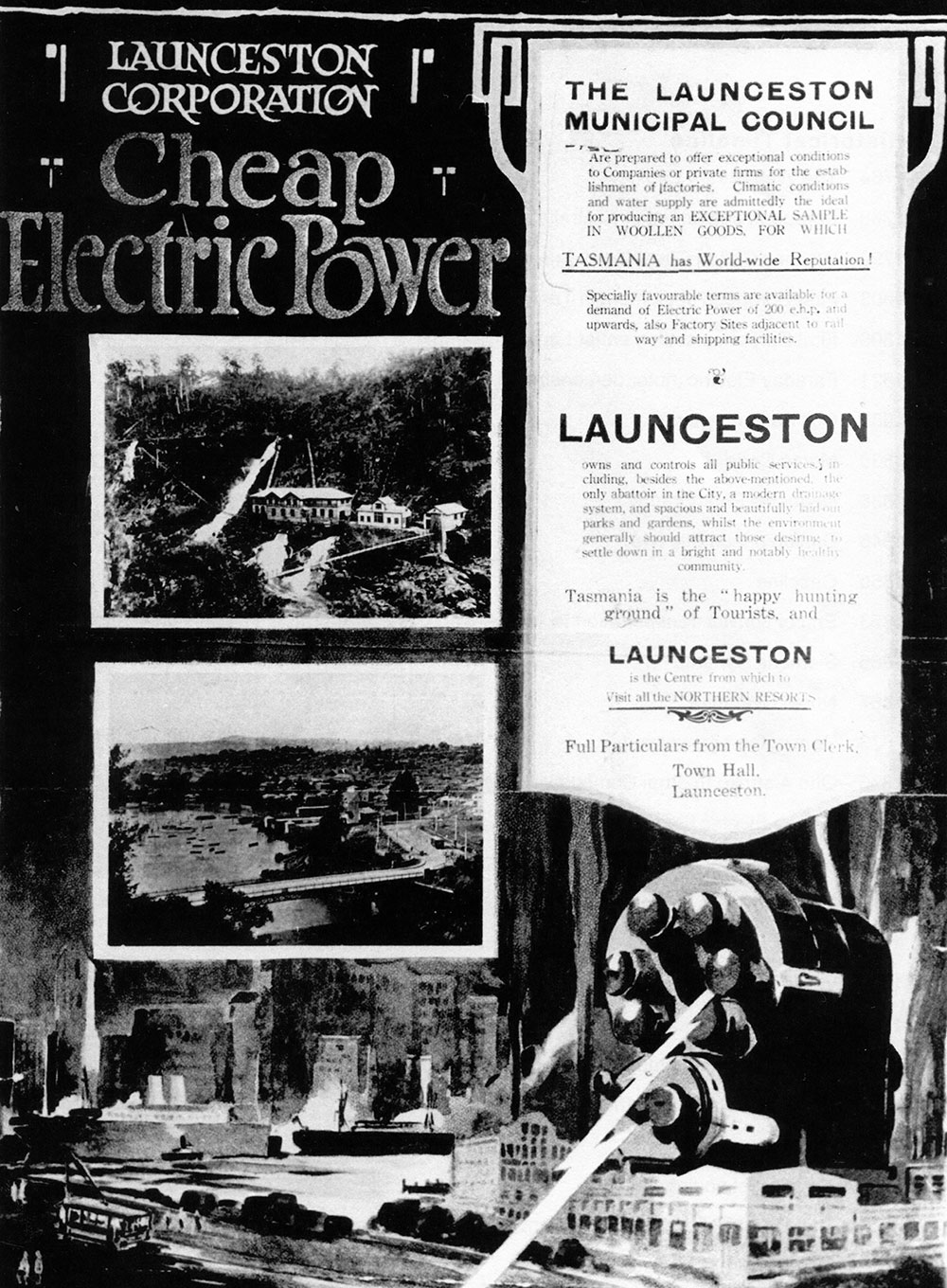 If the depression and the destruction of ‘The Great Flood’ of 1929 did not occur the council could have been operating a scheme similar to the Trevallyn Hydro Electric Scheme.  In  December 1928 and January 1929, the newspapers of the time were reporting on a scheme by council to spend £300 000 on developing a scheme to bring water by tunnel from a proposed dam   at the Third Basin to a proposed power station near Launceston.  This scheme later became  the Hydro Electric Commission’s Trevallyn Power Scheme in 1955 over twenty five years later.

The Duck Reach Power Scheme, possibly more than any other scheme, moulded the future of the   city Launceston.  And, whether we like it or not, possibly moulded the way the State Government visualised the generation of electricity in Tasmania. In the Duck Reach Power Station, with the combination of its historical significance, natural setting and scientific and educational value, the city has taken the great opportunity to preserve the remaining,    fading evidence of a dying age and reflect on the way people lived, worked and thought in the   past and to conserve this important fragment of Australia’s heritage.

A major project submission, Bachelor of Arts in Environmental Design Tasmanian College of Advanced Education, Launceston.
Compiled during Autumn and Winter 1982
Read more about the Historic Elements of Duck Reach