The Historic Elements of Duck Reach

Considering the age of the development, there is still a large number of element of both the original and reconstructed scheme remaining.

As the building was destroyed by flood in 1929, it is difficult to examine the structure in any great detail.   As drawings do not exist one can only examine the limited number of photographs available.

The generating station was situated about 40 feet (12m) above the level of the river. It was quite a substantial erection, with 18 inch (460mm) stone walls and an iron roof.  Originally   it had only one storey with a gallery running along the side to facilitate access to the machinery.  It was 105 feet (32m) in length and 24 feet (7m) wide with a height of 22 feet (6.7m) to the ridge line, large enough to hold nine or ten turbines.  At that time it only contained eight turbines; five for arc lighting and three for incandescent 1 lighting.
On 12th February 1895 the Launceston Municipal Council accepted the tender of Mr J.T. Farmilo to build the station at a cost of £1  488.9.6, the contract to last 17 weeks.

Because of the nature of the country (being very rocky) a large amount of heavy work was required to build the station.  The contractor was required to secure a firm foundation and form subterranean passages under the building for the water to pass after running through the  turbines.

This task occupied the contractor for several weeks.   The erection of the station was delayed due to the collapse of the inner wall.
To bring the building materials to the site, a rough track was cut from Gunn’s old brickyard off Westbury Road to a position 150 feet (46m) above the river bed on the opposite bank of the river.

An ‘aerial tramway’ was used from there to convey everything across the gorge. The tramway equipment although very simple worked very well, apparently, working after  a few initial hitches.  There was  a fall of over 100 feet (31m) from one bank to the other.  The tramway worked by the weight of the materials in a bucket, gravity allowed the bucket to roll to the  opposite  bank, with another empty bucket moving back to continue the operation.  A brake   attached to the windlass was sufficient to regulate the speed of travel.  The journey across   took about 10 seconds.  The buckets were sufficient in size to carry 2-3 passengers. Span of ropeway 350 feet (107m).

During construction there were about 20 men employed on the site blasting and concreting.     Many tons of rock were removed with the aid of the hammer and drill and dynamite.

The concrete foundations for the building were above 15 feet (4 6m) deep in places.  A large   amount of excavation was required to cut out the trench that acted as the tail-race.

This forms the subterranean passage under the building as well as the main exit at the end of  the building. There was a subsidiary one which ran at right angles and discharged into the screen forward of the building.

All told the rock had to be blasted to a height of 35 feet (11 m) at a point furthermost from the river.  This gives one some idea of the quantity of rock that had to be moved. Much of this was used to construct the walls of the building. 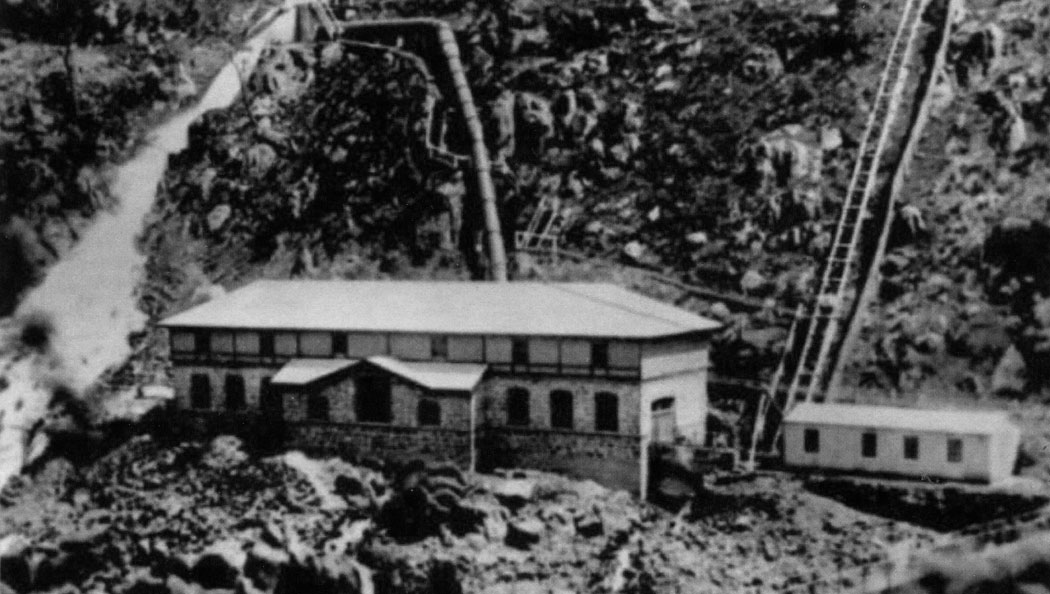 In 1904 the building was altered slightly to facilitate the use of completely new plant.  The two storey section was lengthened to the entire length of the building with only the front bay where the switchboard was located remaining single storey.